A friend of mine asked yesterday why our government does not prosecute some crimes with the same ferocity as illegal drugs and illegal immigration.  I suppose, while most white collar crimes definitely hurt others financially, illegal drugs and illegal immigration cause human pain and suffering.  As far as illegal drugs, we see that in our local community daily.  Meth and opioid abuse are rampant in our local community and in California overall.  Whether it is the user or the collateral damage the user causes to those close to them, meth and opioid abuse create human pain and suffering.  The question got me thinking about illegal immigration.

Illegal immigration creates pain and suffering as well but not in the way progressives will have us believe.  Along with decent folks that are attempting to illegally cross our border to obtain a better life for their families, there is also illegally coming into our country MS-13 and illicit drugs which perpetuate our local drug problems.  These illegal drugs and gang members likely end up in communities filled with legal residents and with legal immigrants thereby bring the violence which these legal immigrants were trying to escape to their front door.

Because of our antiquated immigration laws, decent folks pay smugglers to get them into the country.  As a result of the smuggling, occasionally these decent people die in hot trucks, girls are encouraged to take birth control during the journey as the likelihood of being raped is high, and human trafficking becomes a greater risk.

We need a two-step process to solve this issue and reduce human pain and suffering.  First, we need to modernize and streamline our antiquated immigration laws in order to create an efficient path for folks who want to become legal residents or American citizens.  Our country is that beautiful melting pot of ethnic diversity and is a great country in part because of immigration.  Personally, I love watching the citizenship ceremony during which foreign nationals embrace our culture and our Constitution and become one of us - an American.  Legal immigration is beautiful and should be encouraged, but at the same time, it should be regulated for the benefit of our citizens.  In the end, our citizens, both natural-born and naturalized, should be our first priority.

Second, we need a strong border.  A strong border decreases human pain and suffering by lessening the illegal entry into our country of gang members and illicit drugs thus benefiting our citizens and residents.  A strong border combined with a modernized immigration policy decreases human pain and suffering by providing a better entry process as opposed to human trafficking and smuggling.  Women should not have to risk rape to become an American citizen.  The combination of a strong border and modernized immigration laws is compassionate to all parties.

Those people that support a border wall with no modernized and streamlined immigration law and those people that support open borders and granting citizenship to illegal immigrants don't really care about the people to our south.  The former group of people fails to understand the positive effects that immigration has had on our country and fails to be compassionate to the plight of our fellow man.  Dare I say, racist.  The latter group of people is more insidious in that they simply don't want to really solve any problems and desire to perpetuate the pain and suffering for political gain at the expense of our citizens, our legal residents, those seeking to become Americans, and foreign nationals to our south.  Granting citizenship without securing our border incentivizes illegal entry into our country.  An open border allows gang members and illicit drugs to freely flow into our country thereby causing pain and suffering in our communities.  This pain and suffering created by unfettered illegal immigration are experienced by our citizens and residents who actually came here to get away from such things.

This free flow of illegal drugs and gang members also generates revenue for the drug cartels to our south thereby perpetuating the pain and suffering experienced by those citizens and increasing the likelihood of their desire to immigrate so that they can make a better life for their families.  I would think that most people would rather live and raise their family in a safe home surrounded by their kinfolk as opposed to risking life and limb to illegally enter the USA to escape violence in part caused by our border policy.  An open border actually hurts these local communities to our south by allowing and perpetuating a market for drug cartels and gang members.

In my opinion, those who don't support both a strong border wall with modernized and streamlined immigration law are the ones who lack compassion. They don't really care about the plight of these people, and the expressions of compassion are political.  They are using these people as pawns in a political game, and it's disgusting. People are dying both in the USA and in the countries to our south as a direct result of progressives failing to support a border wall under any circumstances.  Their hatred of President Donald J. Trump outweighs their desire to really decrease human pain and suffering.

It is time to compassionately deal with this issue once and for all and decrease human pain and suffering.  We must modernize and streamline our immigration laws.  It should not take years to immigrate.  Further, we need to secure the border for the benefit of our citizens as well as for the benefit of the citizens of nations to our south.  It is the compassionate thing to do.
Posted by Barry Pruett at 6:34 AM No comments: Links to this post

Email ThisBlogThis!Share to TwitterShare to FacebookShare to Pinterest
Labels: Immigration

The "Diaz Experience" - Screwing Up Elections for a Decade

Our little, sleepy Nevada County has been plagued with horrible elections officials for over 10 years.  The Union is reporting today that our current election official Gregory Diaz screwed up the voter guides again.

The article is here.

When are we going to get someone that actually knows what they are doing and can manage an election... 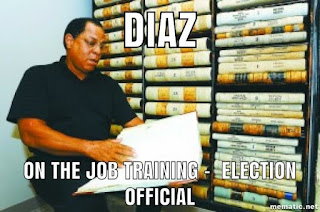 Posted by Barry Pruett at 1:19 PM No comments: Links to this post

"This is not how Hillary Clinton goes down..." - Saturday Night Live

Posted by Barry Pruett at 8:10 AM No comments: Links to this post

"In a historic vote Sunday, a gay rights group won formal recognition from California’s Republican Party. "'This vote is not about orientation,' said Nathan Miller, a delegate with the Young Republican Federation. 'This vote is about participation. They deserve our support,' Miller announced to more than 1,000 delegates assembled at the Sacramento Convention Center."

"Republican Party Secretary Patricia Welch, a conservative from Humboldt County said, 'I’m a firm believer in the Second Amendment. And I believe in the sanctity of life and I believe it begins at conception. I also have an abiding belief in my savior Jesus Christ. I also believe it is time for hard-working Log Cabin Republicans to be chartered into this organization.'"

"The vote means for the first time ever, gay Republicans are officially welcome to organize and recruit new members to the party."

"'It shows that we welcome all groups whose stated goal is to elect Republicans,' said Assembly Republican leader Kristin Olsen, of Modesto."

The entire article can be found here.

Posted by Barry Pruett at 9:08 AM No comments: Links to this post

Merry Christmas to all!


Posted by Barry Pruett at 8:58 AM No comments: Links to this post

"North Korea experienced a massive Internet outage Monday, and some researchers and web watchers speculated that the country's online connections could be under cyberattack.  The Internet outage comes less than a week after the U.S. vowed an unspecified response to a massive hacking attack against Sony Pictures Entertainment over the release of the comedy film 'The Interview.' The plot of the comedy centers on the assassination of North Korean leader Kim Jong Un, leading to widespread speculation that the country was responsible for the attack. Late last week, the FBI publicly blamed North Korea in the incident, though Pyongyang has denied involvement."
"The White House and the State Department on Monday declined to say whether the U.S. government had any role in North Korea's Internet problems."

"'We have no new information to share regarding North Korea today,' White House National Security Council spokesperson Bernadette Meehan told Fox News. 'If in fact North Korea’s Internet has gone down, we’d refer you to that government for comment.'"

"North Korean diplomat Kim Song, asked Monday about the Internet attack, told The Associated Press: 'I have no information.'"

The rest of the article is here.

Kim Jong Un's internet went dead.  I wonder who did that?

Posted by Barry Pruett at 3:46 PM No comments: Links to this post